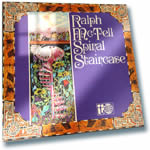 My first album had sold well enough to warrant making a second and once again Gus Dudgeon was called into produce. My “summer seasons” in Cornwall, where I was a resident at the Folk Cottage in Mitchell, had sent my writing in its usual two directions, on the one hand ragtime or goodtime jug-band music and on the other a reflective nostalgia for the positive aspects of my childhood. Songs like Mrs Adlam’s Angels emerged alongside Last Train and Ride and reflective and personal songs like Daddy’s Here next to the up-tempo title track Spiral Staircase.

My jug band had several gigs around the Newquay area. Looking back, I am amazed how we got away with performing with no amplification whatsoever, playing mostly to bemused holiday makers on camp sites, caravan parks, the odd pub and one or two clubs. We were playing the sort of music that almost no one would have been familiar with, but we were able to communicate a great sense of fun. Our Jug player Henry “VIII” Bartlett was a great extrovert whilst our alleged rhythm washboard player “Whispering” Mick Bennett thrashed and whistled infectiously. We managed fairly close harmony vocalising on songs like Ukelele Lady and Boodle Am Shake. Our itinerant personnel was stabilised eventually with Pete Berryman on guitar but we had quite a bundle of instrumental players at this time. I thought it would be a good idea to try to write material for the band and I had a riff which became Spiral staircase and it was very popular. Last Train and Ride emerged from my putting random chords together i.e. C followed by B7th and, in my naïvité, I imagined that such a musical combination could never have been done before. It became the hook for the song.
Mick Bennett was always very supportive of my early efforts at song writing and to be truthful I think I too was quite full of wonder when a new song was completed, especially what I found in probing into my childhood memories. My contemporaries were still falling in and out of love and writing those kind of songs. I was married and had a child so I tended to cast about for alternative themes to address.

Gus Dudgeon handled the eclectic mixture of material with his usual aplomb. We commenced work at Regent Sound Studios in Tottenham Ct. Road. This time Gus felt that some numbers would benefit from properly orchestrated string parts and we engaged Mike Vickers of the Manfred Mann band to write them. At the time I was suspicious of the idea of mixing violins with my own music, but such a “radical concept” had recently earned some credibility through tracks like How Can You Hang On To A Dream? and Eleanor Rigby. When I heard the result I was knocked out at the way the tone of a string section could enrich my songs.

By this time, I had made my first radio broadcasts and was a regular performer on a program called Country meets Folk. It was produced for the BBC by the late Ian Grant and it was there that I met their resident double bass player, a great character called Brian Brocklehurst. We booked Brian for the early sessions and, apart from him asking me to marry him several times, which was a bit disconcerting, his general merry demeanor and almost overpowering aftershave added enormously to the atmosphere in the studio. On the album he is credited only as “Brock”. On Country Meets Folk, Brian was called upon to accompany all the guitarists, to give a bit of low end resonance to the transmissions. This meant that he might regularly have to memorise six or seven songs that he had never heard before. Usually, he managed to make a good fist of this. Occasionally the odd ricket might slip through but I still cannot think of a more energised radio program. It all went out live at around midday on Saturdays. It was on this show that I first aired “Streets of London”.
I had written this song over a long period beginning with the tune in Paris in 1966 where I played it as an almost sedate ragtime pace. It slowly metamorphosed into its current form and I wrote three of the verses. During the previous summer I had offered it to anther singer at the Folk Cottage known by everyone as John “the Fish” (he had worked as a fisherman). I was a littlle hurt when he declined the number on the grounds that it was “a bit sad”.
Later I wrote the words out on the traditional fag packet or napkin for another singer called Derek Brimstone who loved it. At this time it still only had three verses. Some time later I met up with him again. He told me that he had never had a reaction to any song like he was getting for this one. He told me that I had to start playing it myself. I guess I was still smarting from the “sad” description but I did begin to use it and the reaction was incredible. The first time I sang the song it was greeted by a silence at the end that seemed to last for minutes and then a thunderous applause. I thought that the song still felt too short and so I added the “Seamans’ Mission” verse.

What I didn’t know until many years later was that, on its first broadcast, the switchboard at the BBC was jammed with enquiries about the song. The reason I didn’t know at the time was that the show was broadcast from the old Playhouse Theatre in Northumberland St. off Trafalgar Square. The calls all went to Langham Place. Apparently nobody at the time thought we would be interested in this positive reaction. I don’t think it would have influenced our decision to release it, but it may have made me a bit more positive about the song.

Actually, at this time I still did not want the song to appear on Spiral Staircase but Gus pleaded with me to do just one take of it at the very end of the recording sessions. Whilst the jug band, (Henry, Mick and Pete) repaired to the pub around the corner, I reluctantly agreed.
The incredible sleeve design was done by Peter Thaine, my old friend from Croydon Art College days. I was really excited by his concept and attention to the smallest detail. I clearly remember being shown how the pattern around the corners of the sleeve was derived from an old Imperial Russian banknote. I recently met up with Pete again. He has promised to let me have the artwork so I can get it framed.

When the final L.P. came out, Streets opened side one. I had wanted Spiral Staircase to be the opening track, as this felt closer to the musical direction I thought I should be heading toward. My dilemma as to musical direction has always been with me. My love of guitar-based work has managed to coexist alongside my more poetic leanings right up to the present.

Four days after release Nat Joseph (Owner of Transatlantic Records) rang me up at home to tell me we had already got our first cover version. A few days later someone reported hearing it sung in Australia. Cover after cover appeared (to date there are 212 known recorded versions of the song). Thankfully none of these were initially released as a single, as most people considered that, being nearly five minutes long, it was not a song that could succeed commercially. My life was changed forever. I was 24.

Spiral Staircase was recently re-released on CD by Transatlantic with the original cover and track listing. At the moment that version is not currently available, but you may be able to get most of the tracks on a compilations album.